Journeys of all kinds 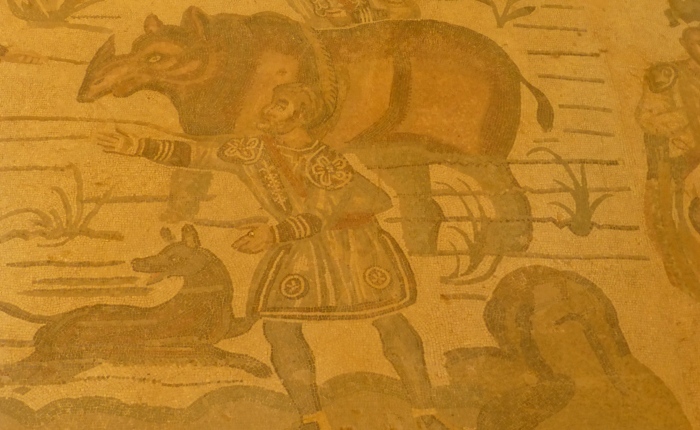 Sicily has a rich and varied history due to the various civilisations which have occupied it in the past. In antiquity Sicily was settled by the Phonecians, the Greeks and the Romans. Ancient ruins are abundant, some still in excellent condition.

As a mosaic tragic, I was on the hunt for Roman mosaics, and so was very much looking forward to visiting Piazza Armerina in Morgantina to view the remains of a Roman villa.

The Villa Romana del Casale is an example of a luxury Imperial Roman Villa, containing late Roman mosaics dating from around 4th century CE. The mosaics are said to be among the finest Roman mosaics in situ, due to their artistic quality.

The site became a UNESCO world heritage site in 1997.

The mosaics are very well preserved due to being covered in mud, from landslides and floods over the centuries. All of the rooms in the villa contain mosaic floors, unusually even in the servant’s area and utility rooms.

The rooms with particularly interesting mosaics include the Ambulatory of the Great Hunt, The Room of the Gymnasts, and the Room of the Fishing Cupids. That is not to say that the other rooms are not interesting, such as the mythical scenes, including the Labours of Hercules, but the mosaics were similar to numerous other sites.

Ambulatory of the Great Hunt

The most impressive in my opinion was the Ambulatory of the Great Hunt, which is a corridor having a length of about 60 metres. Romans conducted these great hunts to capture exotic birds and animals, which were later shown at the Circus Maximus and the Colosseum in Rome.

The left side of the corridor depicts various hunting scenes. The animals and birds being hunted and captured are in Africa and are being loaded onto ox drawn carts to be transported to the port of Carthage to be loaded onto sailing ships.

The central part of the corridor shows a basilica, in front of which are animals being unloaded at the port of Ostia.

Towards the right of the corridor, a sailing ship can be seen in the Port of Alexandria, Egypt which has an elephant and a bison being driven on board. Animals such as dromedaries, tigers, hippopotamuses and rhinoceroses were also captured in the Nile Delta.

Tiger cubs are seen being captured in the final section of the corridor, along with a griffon lured by a bait inside a box. There is also a lion killing a wild donkey.

The far end of the corridor a girl is depicted holding an elephant tusk, representing India, a phoenix and a tiger.

The Room of the Gymnasts

In 1959-60 a mosaic identified as the Room of the Gymnasts was excavated. Over the years, the mosaic has been identified as the “bikini girls” – I prefer to describe them as the gymnasts. The gymnasts are engaged in various sports, including a jump with weights (the weights looking very much like the weights we use today), a discus throw, a cross country race and a game with a ball.

Room of the Fishing Cupids

This room was a dining room. The cupids utilise several different methods of fishing, and can be seen with nets, fishing lines, a harpoon and a fish trap. The sea is teeming with fish of different kinds, including what looks like a dolphin.

A villa and colonnade can be seen in the background.

Gallery of Mosaics from various parts of the Villa

I had arrived at the Villa much later than planned – it was seething with humanity. The mosaics are viewed from walkways, which were so crowded, it took a Herculean labour (the thirteenth labour of Hercules) to actually view the mosaics properly. It was beyond Hercules efforts to obtain photographs which could possibly do justice to the mosaic floors.

Moral of the story – get to the Villa early, and do not become distracted by anything – even a travelling companion falling down and breaking a rib. Just get a cab and go.